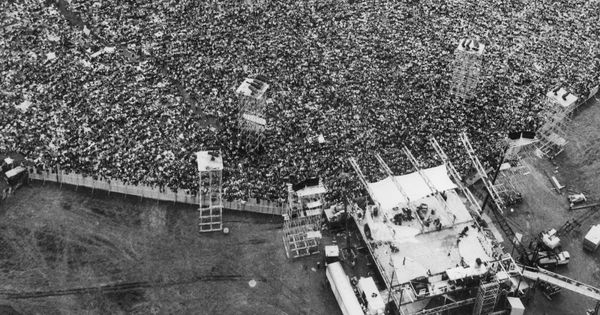 After reading the excellent article on the 60th anniversary of Miles Davis' Kind of Blue album at Hypebot I realized that the album came out the same weekend as Woodstock, albeit years earlier.  It got me thinking about the musical ripples from a couple of key events that could continue to resonate for decades, and still keep influencing people.  And how it has affected my life.

This being the 50th anniversary of the Woodstock concert, I especially enjoyed the real-time playback of ALL of the audio from the event on WXPN, thanks to the amazing efforts at Rhino records for years in creating the definitive box set.  I couldn't listen to all of it, with things like deadlines and sleep getting in the way, but it was very interesting to finally hear a lot of the music that was performed at the concert that never made it onto the film or soundtrack albums.

Country Joe and the Fish stretched out way more than I would have imagined, although not nearly as far out as the Incredible String Band (hard to imagine something like that in a festival situation today).  I have even more respect for Joe Cocker's band, who demonstrated their musical chops in a way that the film couldn't show.  And I had always assumed that The Band was never happy with their performance, but listening to it I was just blown away by how they got their vision across, despite the considerable distractions and issues that the festival suffered through.  Tears of Rage?  Don't You Tell Henry?  Who knew?

The Airplane also impressed, despite having been up all night waiting to go on.  The crowd demanded more!  And of course, I still got chills hearing Hendrix wail the Star Spangled Banner, after a blistering Voodoo Chile.  I always wanted to have a band do justice to Villanova Junction, but that's way more difficult than it might appear. 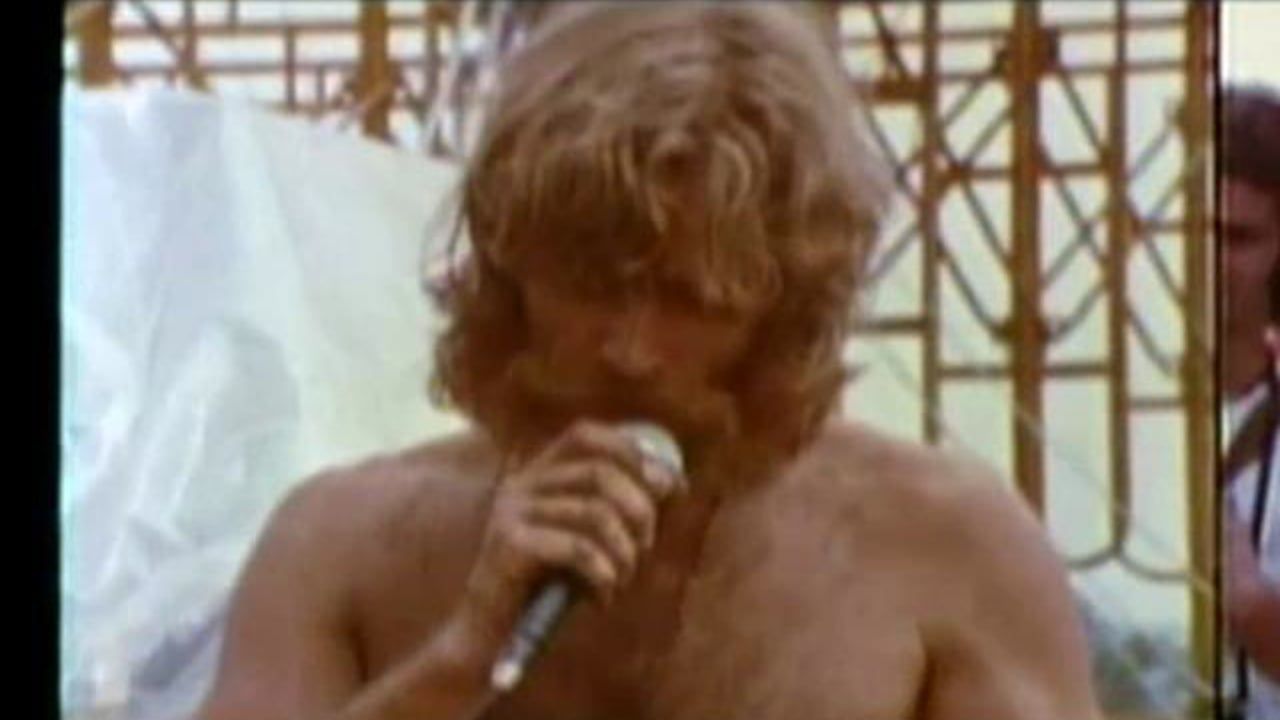 And my respect for the announcer for the entire event, Chip Monck, is even higher now.  His calm delivery, ability to quickly react to the crowd and situation, and tireless patience trying to prevent a disaster of falling towers really makes the experience of listening to the announcements between acts actually enjoyable after a while.  To hear all of this now is truly remarkable; I never knew there was a recorder rolling the entire time by the side of the stage, in addition to the multi-track truck behind it.

What really got to me though, was finding out later that Jerry Garcia was quoted around 1971 that he felt the invisible presence of time travelers from the future while at the event!  Was he talking about me, and everybody that was listening along 50 years later?  Granted, it was a huge event at the time, but still.  That's kind of eerie... 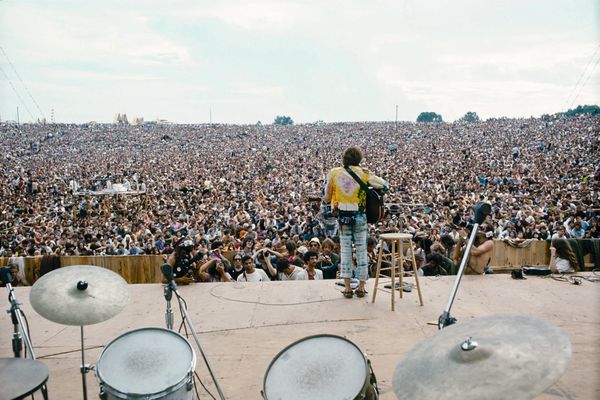 Because Woodstock really changed a lot of things: it showed that large festivals could happen without massive fights or police, that extremely powerful sound systems could actually be constructed that could provide quality sound for hundreds of thousands, that there was a real need for fans to get together.  A meeting of the tribes, in a way.  It's been corrupted into an extremely expensive, commercial industry now, but wasn't always that way.

Long, improvised jamming wasn't something you heard on the radio, yet here was act after act showing that there were listeners who wanted to take the musical journey.  Who knew where it would go?  It's one of the things I was struck by when I first saw the Grateful Dead at JFK Stadium in Philly: there's a band really jamming in a STADIUM!  And the crowd was digging it.  The jam band scene as we know it really started there, as far as I was concerned. 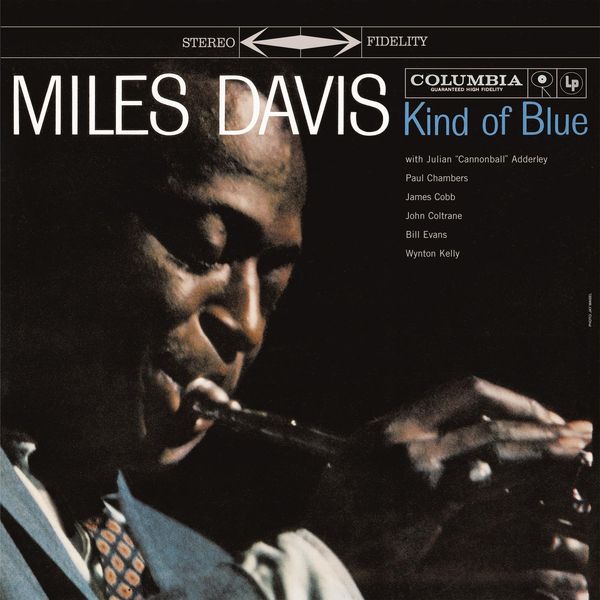 Ten years to the day earlier than Woodstock, one of the most successful jazz albums of all time was released by Miles Davis.  Kind of Blue is one of my favorite recordings of all time, and has been ever since I first discovered it.  It is the embodiment of modal jazz, and it creates that relaxed vibe that most people think of as classic cool jazz in New York in the late 1950's.  I've gone on before about how huge this album is, not only technically but the fact that such a classic really was nothing more than a handful of scales before the session.  It was essentially all improvised live in the studio.  Not the first or last album to do so, of course, but here was definitely a case of capturing lightning in a bottle  Just like with a live show of improvised music, sometimes it's going to be truly fantastic, and sometimes it won't be.  When it works, it REALLY works.

It was this sort of thinking that I had in mind when I put together my band a few years ago (as opposed to my solo ambient work).  I was always drawn to bands that had the ability to cut loose and just groove on one chord for a while, exploring all of the possibilities in the moment.  Of course, doing this nowadays, combined with being an unknown, not in my 20's, and not in a major music city guaranteed that it would be quite a challenge to get it out there in front of listeners.  There are virtually no jazz performances nearby, and the jazz clubs in the big cities already are struggling.  Good luck if you aren't well known.  The rock nightclubs always want a singer when they are booking acts.  They might take a chance on some young dudes that can bring in a crowd.  So I'm left with a lot of support from overseas and elsewhere, but not a lot of options nearby.

The jam band crowd is probably where most people would categorize my band, and that's certainly fine with me.  Although I like to keep throwing some unusual angles out there, and always looking for ways to blend in ambient or unexpected turns when I can.  But I must say I was not expecting the struggles of booking shows, finding venues to play, and getting anybody that I had heard of to check out my stuff.  And I understand they have more than they can handle, so who cares about this weird music and video coming from south central PA?

I was warned about this from friends that I trusted, too, but figured I had no real choice.  Was I going to go through the rest of my life regretting not doing what I felt deep down that I had to do?  After all, I had been making up stuff since I was a kid, had worked in radio stations and recording studios, been in cover bands for years and years, playing hundreds of shows to thousands of people.  I knew other experienced musicians that could improvise also, so why not just do it?

Then came the non-stop world that basically took over my life: composing/jamming/writing/recording/editing/mixing/mastering/duplicating/promoting/publicizing, making web sites, creating video after video, sending out CD's to stations and promoters, designing posters and covers, making sure the social media channels know what's going on at all times, learning how to properly promote a release, work with publicists, create a one sheet, secure copyrights, register with BMI so I can pitch songs to be licensed by web/movie/TV/media, coordinating schedules for practices and shows with everybody, being constantly on the verge of bankruptcy because nobody will help me.  Oh, and deal with overworked venue booking agents and try to line up some live shows so people who don't know me will take my music seriously.  A handful of really cool souls who care come through once in a while; most just ignore anybody they don't know or haven't heard of.

I wish I could spend more time just hanging out, and supporting bands & venues.  Think I have time for that?  I try, but there's only so many hours in the day.   How about getting enough sleep, for once?  Or seeing my friends and family once in a while.

Despite all of this, and the complete deconstruction of any normal life that most folks could relate to, I still do it.  How can I not?  Throw on Kind of Blue, and I remember why.  The ability to communicate across time and create a mood for people I've never met is an amazing honor.  Every time I get an email or post from somebody who says they liked what they heard, I know why.  When I get virtually transported back to a muddy field in New York state for a weekend of electric jams, I remember why. 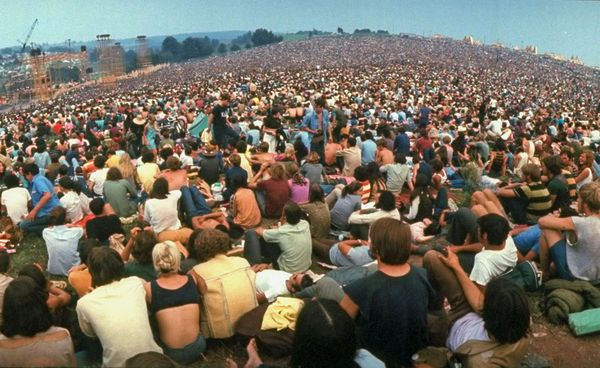 My boss at my day job says that he would love to learn how to play guitar, and thinks it's amazing that others can do it.  I guess in a way some of us are just destined to create, and endure what comes with it for better or worse.  But at least we know deep down that we've accomplished to some extent what we know is there.  It just has to be done.

Some say that all music has already been written, and as musicians we just tune in on it because we can.  Some folks like my Dad could build just about anything, which I could never do.  It's not in my DNA, for some reason.  But having a person in Mexico City tell me how my music got them through a rough night at work, I know I can create something cool, and get it out there so it can touch somebody.  And hopefully continue to do so.

August is an amazing month.  So hot, so full of energy.  And with ripples from it that continue to spread out, perhaps forever.